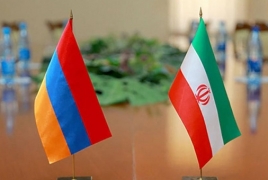 Trade between Armenian and Iranian increased by 43.5% in the first 10 months of 2022, rising from $390 million to around $560 million in the reporting period, Armenian Deputy Economy Minister Armen Arzumanyan told reporters on Tuesday, December 6, Arka reports.
Arzumanyan noted that the countries have good business cooperation and for its further development it is necessary to identify all issues that will help step up economic activity.
“The Iranian market is quite extensive, but has a problem of self-sufficiency. We are confident that we need to find out what we can do to export Armenian food, agricultural and other products to this market, which is by and large familiar with Armenian produce,” he said.
According to Armenia’s National Statistical Committee, trade turnover between Armenia and Iran in January-October 2022 amounted to about $565.5 million, an increase of 45.3%. Armenian exports to IRI totaled about $92 million, an increase of 82.4% year-on-year, while imports from Iran grew by 39.1% to $474.3 million.