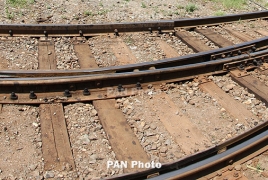 French Development Agency and the French government may provide support for railway projects to be implemented in Armenia.

Francois-Henri Cloarec, head of the Economic Department at the Embassy of France in Armenia and Georgia, made the remarks at a meeting with Armenia’s Deputy Minister of Territorial Administration and Infrastructure Armen Simonyan on Wednesday, January 27.

During the meeting in Yerevan, the sides discussed the prospects of current railway projects and cooperation in this field.

The Deputy Minister inquired about the prospects the French side sees in deepening the cooperation, noting that there are several directions that can be discussed if the French side is interested.

Cloarec cited a possible support mechanism from the French Development Agency and assured that railway projects are part of their priorities.