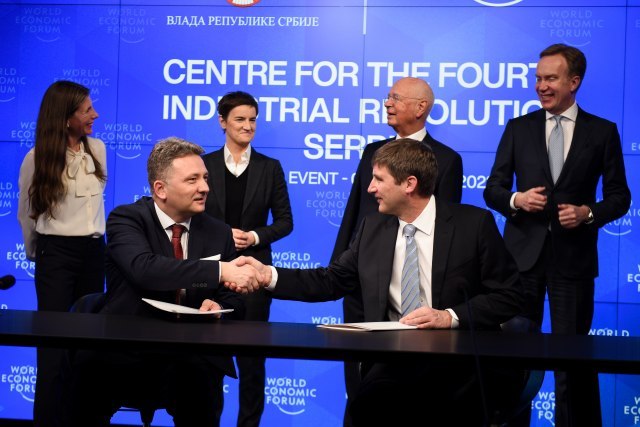 The meeting at the WEF headquarters was followed by the signing of the Agreement on the Establishment of the World Economic Forum Center for the Fourth Industrial Revolution in Serbia, and the document was signed on behalf of the Serbian Government by Mihailo Jovanovic, Director of the IT and e-Government Office.

“This is something we have been working on for many years, back in 2018 we signed a Memorandum of Understanding,” said Prime Minister Brnabic.

The center itself, she added, will start working on March 1.

“It will deal with the development of artificial intelligence, biomedicine, biotechnology, ways in which digitalization can increase productivity…”, she stated.

She mentioned that this is the 16th such center of the World Economic Forum in the world, and the 3rd in Europe – after Norway and Russia.

“This is just the beginning of cooperation. Now these 16 centers will have a joint meeting every month and talk about delegation of duties. When we notice that one of the centers – and I believe one of the best will be our center – has a new achievement, with the World Economic Forum, we will work on the development and implementation of that idea”, explained Brnabić.

By the way, the World Economic Forum is an organization founded in 1971, based in Geneva, and the most famous gathering is the annual meeting of the Forum in Davos, during which leading businessmen, politicians, intellectuals and journalists gather to discuss global challenges.

In addition to meetings, the Forum conducts a number of surveys, and the WEF has observer status with the United Nations Economic and Social Council.