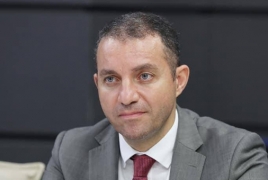 PanARMENIAN.Net – Minister of Economy Vahan Kerobyan has said that Armenia’s decision to lift the ban on the import of Turkish goods is due to political reasons, although he himself was in favor of extending the embargo.

“As the body responsible for the economy, we must closely monitor and protect the companies that have been created in the past year and make sure that their existence is not endangered, that they are not left out of the market,” Kerobyan said Wednesday, January 12, according to Armenpress.

“We are monitoring the situation, and if problems arise and we see that the businesses of investors are endangered because they haven’t grown enough to withstand competition with Turkish goods, we will introduce certain programs to protect investors.”

In the war against Artsakh (Karabakh) in fall 2020, Turkey supported Azerbaijan militarily, also by transferring terrorist mercenaries from the Middle East to fight against Karabakh. Armenia was the first to report on Turkey’s deployment of thousands of Syrian fighters to Azerbaijan. International media publications followed suit, as did reactions from France, Russia, Iran.