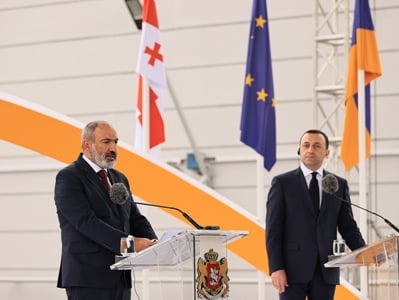 In the current difficult conditions between Georgia and Armenia in the sphere of trade and economic relations, growth has been recorded. During the same period compared to the previous year, the growth was 97%, Armenian Prime Minister Nikol Pashinyan said in his speech on the occasion of the opening of the Friendship Bridge today.

He noted the importance of modern infrastructure, which creates strong basis for future cooperation.

According to him, today there are all the prerequisites for the development and deepening of relations with brotherly Georgia.

“This encourages us to further intensify our relations, taking into account the serious potential for the development of relations in the sphere of industry, agriculture, pharmaceutics, communications and communication, transport. There is a serious experience of cooperation in the sphere of energy. It is also important to develop relations in such areas as cybersecurity, culture, tourism, for example, through the development of unified tour packages.

For the development of trade and economic relations the key role is played by communications, which allow for integration into the world economy,” Pashinyan noted.