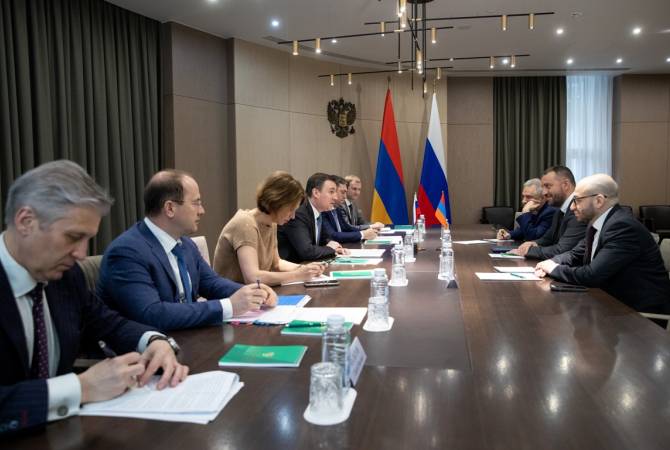 Within the framework of his working visit to Russia, the Minister of Economy of the Republic of Armenia Vahan Kerobyan met with the Minister of Agriculture of the Russian Federation Dmitry Patrushev on April 12.

As ARMENPRESS was informed from the Ministry of Economy of Armenia, during the meeting, the prospects for further development of bilateral cooperation in the field of agriculture were discussed.

“As an example of the result of joint work, the growth of trade turnover of agri-food products was mentioned, which is implemented both within the framework of bilateral relations and the Eurasian Economic Union,” the statement reads.

The trade turnover of agri-food products between the Republic of Armenia and the Russian Federation in 2020 amounted to 753.8 million USD, and in 2021 – 903.1 million USD, an increase of about 19.8% over the previous year.

Prospects for the development of relations in the field of agro-industry were discussed at the meeting. Both sides stressed that cooperation in the agro-industrial sphere has a significant potential for development.

The interlocutors referred to the organization of business visits of the agro-producers.

Vahan Kerobyan and Dmitry Patrushev agreed that the organization of a direct dialogue in the field of agro-industrial complex is of special importance at present, as it contributes to the maintenance of food security of the two countries.