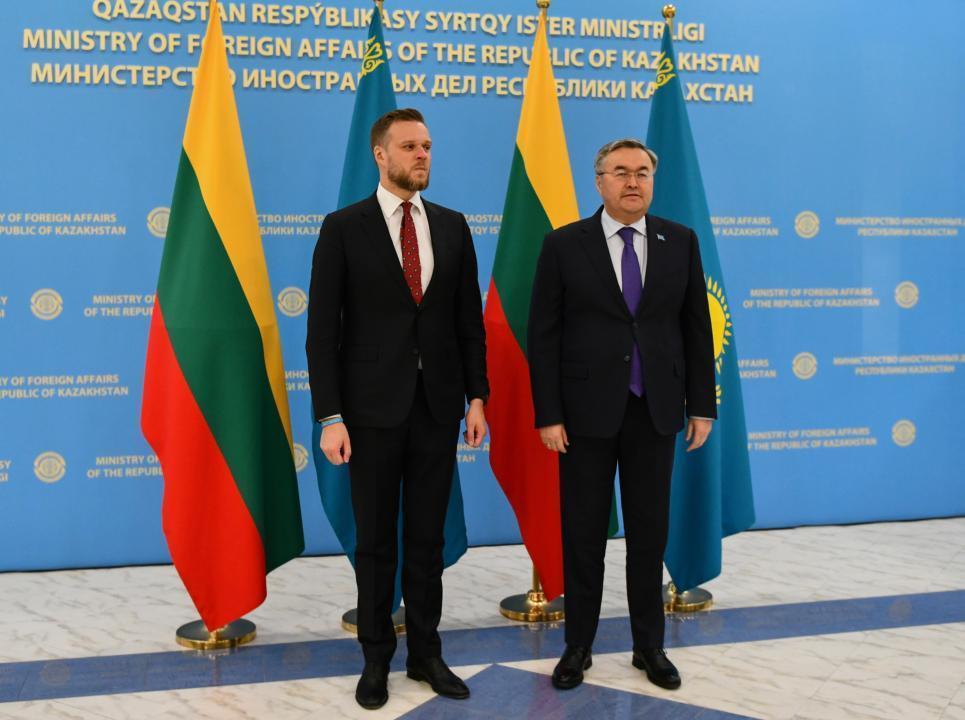 Lithuania is among 10 largest trade partners of Kazakhstan in the EU and 20 largest trade partners in the world, Deputy Prime Minister and Minister of Foreign Affairs of Kazakhstan Mukhtar Tileuberdi said Tuesday during Lithuania’s Minister of Foreign Affairs Gabrielius Landsbergis’ official visit to Astana, Kazinform correspondent reports. Minister Tileuberdi emphasized that the visit is dated to an important historic milestone – 30 years since the establishment of diplomatic relations between Kazakhstan and Lithuania. All these years, in his words, the countries have enjoyed and sustained a trust-based dialogue at all levels instrumental in strengthening of constructive relations and mutually profitable cooperation in bilateral and multilateral formats. Relations between Astana and Vilnius develop fully in keeping with the spirit and principles of the Treaty between the Republic of Kazakhstan and the Republic of Lithuania on mutual understanding and cooperation signed on November 7, 1993 in Almaty, said Minister Tileuberdi. The Kazakh Foreign Minister pointed out that Lithuania was one of the first countries in 2016 to ratify the EU-Kazakhstan Enhanced Partnership and Cooperation Agreement underpinning Kazakhstan’s cooperation with EU member states in 29 areas. While mentioning that Lithuania is among 10 largest trade partners of Kazakhstan in the EU, Minister Tileuberdi revealed that despite disruptions in traditional logistics chains trade turnover between the two countries has increased 2.1fold reaching $500.4 million in 9 months of 2022. Some 170 Lithuanian companies work in Kazakhstan and dozens companies with the Kazakh capital operate in Lithuania. In addition, Kazakhstan and Lithuania work jointly in many spheres starting from professional pilots’ training to medical equipment manufacturing. Foreign Minister Tileuberdi expressed hope that Gabrielius Landsbergis’ visit to Astana will give an additional impulse to strengthening of friendship and partnership between Kazakhstan and Lithuania.