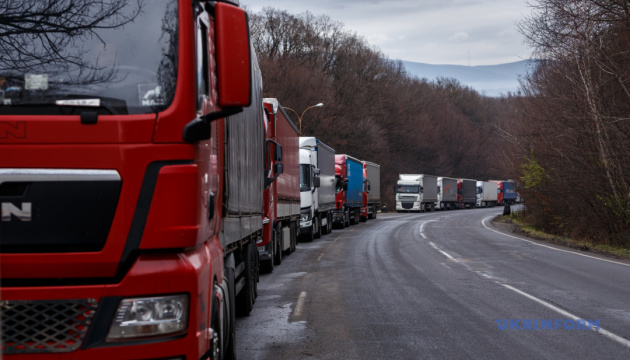 President Volodymyr Zelensky has requested the Cabinet of Ministers, National Security and Defence Council secretary, and Verkhovna Rada speaker develop a format of solutions that will accelerate supplies of all necessary goods from abroad.
The head of state spoke of the issue in a video address to the nation, released on Friday, March 18, Ukrinform reports.

“This primarily applies to food, fuel, and other goods to cover the basic needs of our society. The war is not a time for bureaucrats and careerists from various agencies to hamper supplies for our people,” Zelensky said.

According to the president, the authorities strive to dramatically simplify customs clearance of all critical goods. If tax or excise lifts are required, the authorities are ready to go for such move. If it is necessary to sack customs officers who fail to understand that they must work fast during wartime, the authorities will do so.

“Our borders must be open to everything that Ukrainians need. I am waiting for the appropriate decisions to be made by the end of the day. And then I expect support of our lawmakers. Because today everyone must work only for Ukrainians, for our state, for our defenses. No ambition. No fear. No bureaucracy. Everything must be done to protect Ukraine,” Volodymyr Zelensky said.

Martial law was imposed in Ukraine and general mobilization was announced.