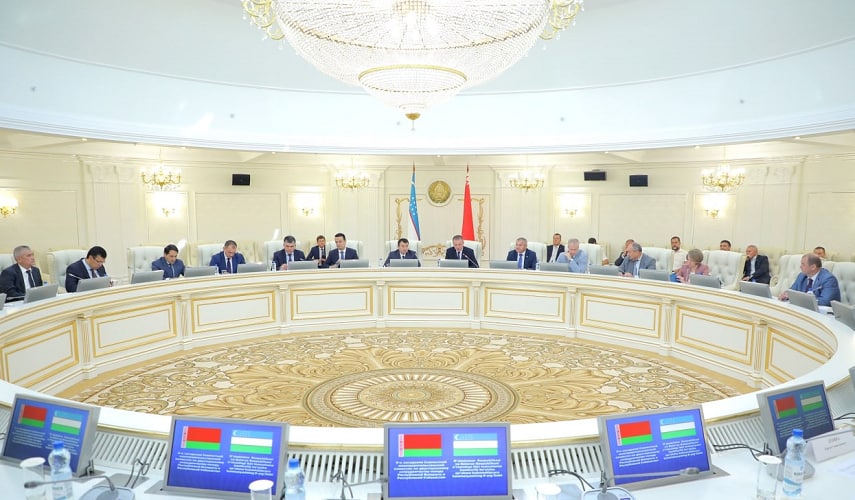 Under the chairmanship of the Deputy PM – Minister of Investments and Foreign Trade of Uzbekistan Jamshid Khodjayev and Deputy PM of Belarus Leonid Zayats, the 9th meeting of the Joint Intergovernmental Commission on Bilateral Cooperation was held in Minsk.

According to the MIFT, the meeting was also attended by heads of key ministries and departments of the two countries.

As part of the agenda, a wide range of issues of investment, trade-economic, industrial, scientific-technical and cultural-humanitarian cooperation was considered.

It was noted that relations between Uzbekistan and Belarus are characterized by high and sustainable development dynamics, which creates prerequisites for deepening cooperation in priority areas.

The significant progress achieved within the framework of the trade-economic partnership between the two countries was emphasized. In 2021, the trade turnover between Uzbekistan and Belarus increased by more than 40% and amounted to $337.3 million. An agreement was reached on the establishment of a Working Group on the development of mutual trade from among representatives of the responsible ministries and departments.

Positive trends in the development of investment cooperation and industrial cooperation were discussed. Over the past three years, the number of enterprises with the participation of Belarusian capital in Uzbekistan has quadrupled and amounted to 157 units. In just seven months of this year, 58 enterprises were created. In turn, 101 enterprises with the participation of Uzbek capital operate in Belarus. Great prospects were noted for the implementation of new joint projects in mechanical engineering, textile, food, pharmaceutical industries, electronics and the production of building materials based on effective cooperation in the production of high value-added products.

An exchange of views took place on issues of cooperation in the field of IT and innovation. An agreement was reached to hold the 2nd meeting of the Belarusian-Uzbek Commission for Cooperation in Science and Technology in full-time format in the first half of 2023 in Belarus.

Particular attention was also paid to cultural and humanitarian cooperation. Readiness was expressed to organize special tour packages for Belarusian citizens, such as “Tourism for the family”, “Sunny holidays”, “Vitamin tour”, “Study and Travel”. Belarusian colleagues were invited to take part in the work of the Tashkent International Tourism Fair in November this year and the 25th session of the General Assembly of the UN World Tourism Organization in 2023 in Samarkand.

As a result of the meeting, a final protocol was signed, reflecting the key agreements reached during the events, as well as the “Roadmap” for implementing the agreements reached following mutual visits of the heads of two country governments.