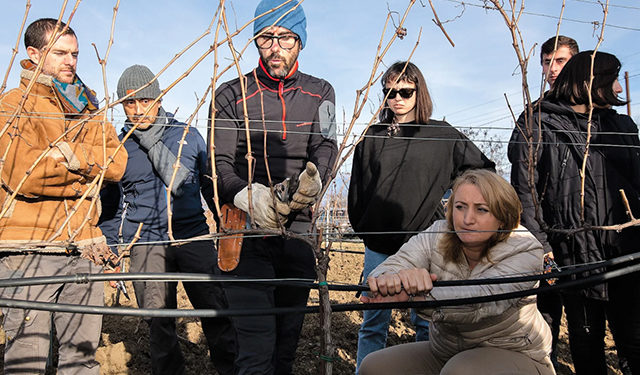 Twenty grapevine producers participated in training held at several locations in Kakheti, a traditional winemaking region of Georgia, in January. International expert Julio Prieto, specialized in phytosanitary problems of grapevines, from the Ministry of Agriculture of Spain, conducted the trainings with the support of the European Union and FAO in the framework of the EU4Business program.

EU Innovative Action for Private Sector Competitiveness in Georgia is a joint initiative of the European Union and four UN Agencies, which was launched in 2019 with a budget of EUR 5 million. The project aims to enhance entrepreneurship and business sophistication by strengthening the capacities of government and local entities to develop and operate clusters, and supporting companies directly with strategic investments and better connections with diaspora group, while also demonstrating the effectiveness of these strategies to businesses.

During the trainings, Mr. Prieto covered the entire vineyard cultivation process and the complete cycle of grapevine production, from growing saplings to harvesting grapes. The learning sessions included such topics as general management of various types of vineyards, planning of pruning, fertilization, as well as irrigation, organic grapevine production and Integrated Pest Management.

The issue of pest management was the most interesting for all winegrowers present, as the pest “Lobesia botrana,” also known as the “European grape worm,” is a common problem. The expert specifically focused on biological pest control through means of mating disruption pheromones. This method has already been tested in the region, with poor results due to the lack of technical guidance.

The EU and FAO stay committed to supporting agricultural wine producers in Georgia to make the agriculture sector more competitive, profitable and more resilient to new challenges
“It was very interesting to hear about the Spanish and international experience in addressing the challenges of vine worms. These training sessions were very informative, even the most experienced winegrowers learned a lot, and for the newcomers, it provided crucial knowledge to avoid many problems,” Giorgi Rukhadze, owner of George Grey Winery, who participated in the training, stated.

Georgia Exports 107 mln Bottles of Wine in 2021
Revenue from wine exported from Georgia last year was equal to $250 million. According to the National Wine Agency, wine exports in 2021 were 359% higher than in 2012.

It is noteworthy that for the first time in the history of independent Georgia, Georgian wine exports to the United States exceeded 1 million bottles.

“441 companies exported different volumes of wine from Georgia, while in 2012, only 120 companies had the opportunity to export wine,” the agency said in a statement.

January Sales Look Promising for the Year Ahead
Georgia exported 5.3 million bottles of wine to 35 countries in January 2022, 51% more compared to the same period last year, the Ministry of Agriculture and Environmental Protection announced.
Based on the same source, the exports generated $11.6 million from the sale of wine abroad in January, marking an increase of 43%.