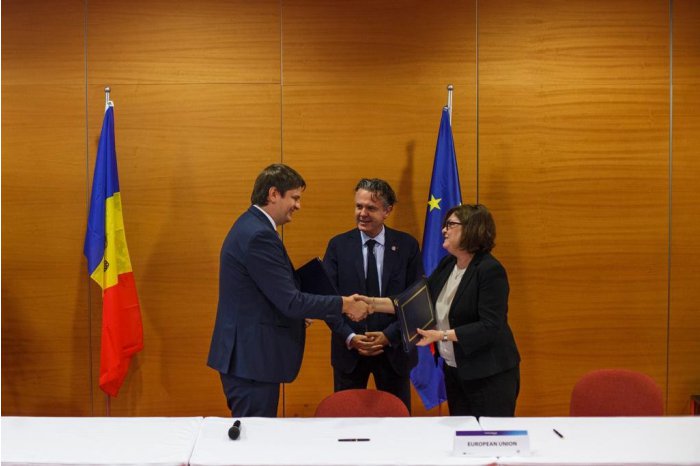 The Moldovan carriers of goods will be able to move on the territory of the European Union without authorizations. The measure is provided for in the agreement on the liberalization of goods transport with EU, signed by Deputy Prime Minister, Infrastructure and Regional Development Minister Andrei Spinu and Delegated Minister on behalf of the French Presidency Christophe Bechu on 29 June.

The document was signed at a conference titled, Connecting Europe Days 2022, Europe’s mobility flagship, which is EU’s most important event on mobility and transport, held in Lyon, France, on 28-30 June.

The agreement was concluded till 31 January 2023, with possibility to be extended. ‘’I am proud by the decision taken today and which will bring benefits to everybody. Dear carriers, you have now possibility to carry out transport operations in EU for the Moldovan exports without road transport authorizations. You can sign, in continuation, contracts on supply of goods, especially of agricultural products, through the use of alternative routes on the territory of the European Union. You have an open way in EU! You have freedom, lower costs and you directly benefit from our rapprochement with EU!,’’ Andrei Spinu said.

At the ceremony on the event’s opening, Andrei Spinu had a meeting with European Commission for Transport Adina Valean and signed a joint letter with Ukrainian Infrastructure Minister Oleksandr Kubrakov for the European Commission on the development of the road corridor on the route Zhytomyr – Berdichiv – Vinnytsia – Nemyriv – Soroca – Rascani. Thus, the development of this route, especially its inclusion in the TEN-T map and the construction of a border bridge across the Dniester river, will solve the logistic problems and will create proper safety conditions for the transport and exchange of goods with the European Union.

Also, the officials asked for the development of the network of roads in Moldova with the network of highways from Romania, through the construction of the road bridge Ungheni (Romania) – Ungheni (Moldova) across the Prut river, as a continuation of the highway A8 Targu Mures-Iasi-Ungheni, which will open an opportunity of extending this construction to Chisinau and Odessa.

At the same time, Deputy PM Andrei Spinu referred to the need of reconstruction of road border bridges across the Prut river: Cahul-Oancea, Sculeni-Sculeni, as well as the construction of a bridge at the Leuseni-Albita border, purchasing of a laboratory for checking the technical parameters needed for the transport of perishable/easily perishable goods and the certification of vehicles, ensuring the control of the traffic safety.

Also on 29 June, the Moldovan official signed, along with other countries (Austria, Germania, Croatia, Bulgaria, the Czech Republic, Romania, Bosnia & Herzegovina, Slovakia, Serbia, Ukraine) also conclusions on the efficient rehabilitation and maintenance of the infrastructure of navigable ways on the Danube river and its tributaries. The document is meant to sustainably and efficiently support the navigation on Danube, reduce the administrative barriers in the river’s cross-border navigation, develop the land infrastructure, especially the places of accosting.

The event, Connecting Europe Days 2022, Europe’s mobility flagship, brings together high-ranking officials from EU, representatives of the civil society and European institutions, in order to discuss ways of strengthening the European transport network, reducing, at the same time, the emissions and strengthening the relations with the neighbour countries.