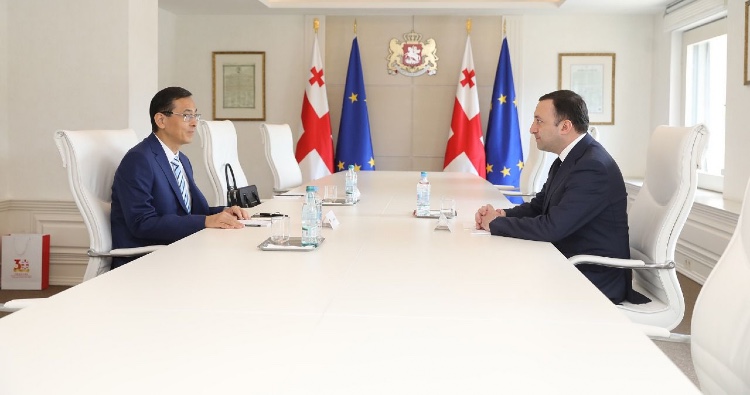 The Prime Minister also noted appreciation to the Ambassador over China’s support of the sovereignty and territorial integrity of Georgia.Photo: Government’s Administration.

Trade and economic relations between Georgia and China were discussed on Friday in a meeting of the Georgian Prime Minister Irakli Garibasvhili and Zhou Qian, the newly appointed Ambassador of China to Georgia.

The Government Administration said the PM had told the diplomat he hoped the “fruitful” cooperation between the two states would continue, as the sides noted China’s position among the top five trade partners of Georgia, with $922 million trade turnover between the countries between January-June.

The two officials also highlighted the total foreign direct investment from China to Georgia exceeded $695 million, and remarked on direct flights between Georgia and China contributing to a “dynamic growth” of tourists.

Garibashvili and Qian expressed their hope the next meeting of the Intergovernmental Commission for Trade and Economic Cooperation between Georgia and China, an annual event, would be held soon.

Strengthening of bilateral ties in education and science was also discussed, with the 30th anniversary of the establishment of diplomatic relations between the countries noted by the parties.

The Prime Minister also noted appreciation to the Ambassador over China’s support of the sovereignty and territorial integrity of Georgia.