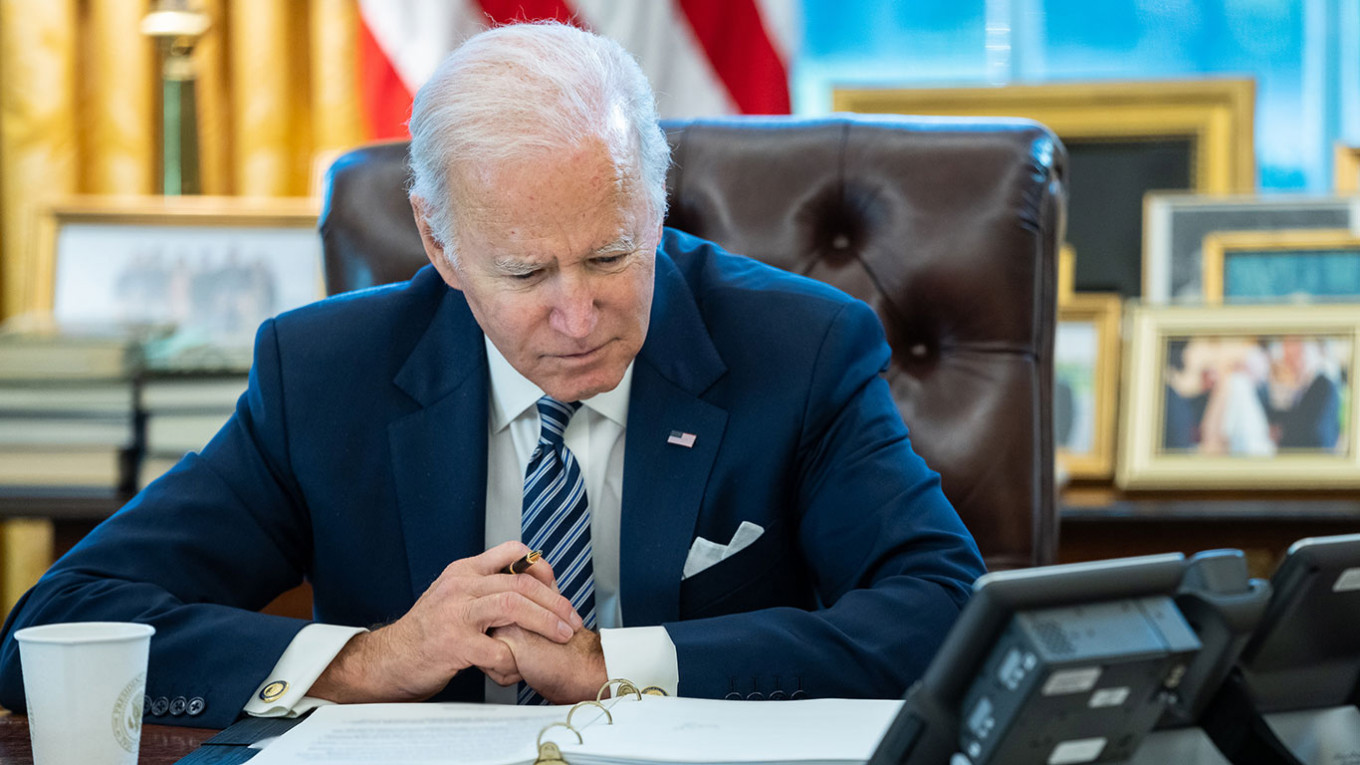 In a press conference marking his first year in office, Biden threatened a host of “severe economic consequences,” for Russia should it invade Ukraine, going further than the White House ever has previously in spelling out what specific measures are on the table.

“You will see that there’ll be severe economic consequences. For example, anything that involves dollar denominations. If they invade, they’re going to pay. Their banks will not be able to deal in dollars,” Biden said in remarks from the White House on Wednesday evening.

While Russia has moved to reduce its reliance on the American currency, more than half the country’s trade is still denominated in dollars — down from more than 80% before the U.S. first imposed sanctions on Russia following Moscow’s 2014 annexation of Crimea.

The threat is potentially the most serious concrete sanctions proposal that the West has put on the table as it steps up efforts to deter Russia from taking military action against Ukraine. Western leaders have warned that a Russian invasion could be imminent following weeks of high-stakes diplomacy which has failed to bring the two sides closer together.

Russia has pledged to ditch its remaining holdings of U.S. dollars from its multi-billion dollar sovereign wealth fund — switching into euro and the Chinese yuan. Just 16.4% of Russia’s overall reserves, which include the sovereign wealth fund and other reserves held by the Central Bank, were in dollars at the end of the second quarter of 2021, the latest data available, with a third in euros.

“Russia has diversified its reserves away from the U.S. Dollar, U.S. Treasuries and U.S.-based institutions. However, diversifying settlement for trade takes time, including energy sales to the EU,” said Elina Ribakoba, deputy chief economist at the Institute for International Finance.

A draft sanctions package outlined by the U.S. last week would mandate sanctions against Russia’s top banks, but made no mention of potentially blocking the country’s entire banking sector from access to the U.S. currency.

Sanctions expert Maria Shagina, a visiting fellow at the Finnish Institute of International Affairs, said Biden’s statement could have been an interpretation of the already-outlined proposals, rather than a new broader initiative.

“It depends on what exactly this measure entails. If it’s limited to placing Russian banks on the [sanctions] list, that was part of the sanctions package. But strategic ambiguity is there.”

Biden also hinted at possible divisions within the West over how to respond to any further Russian aggression, and warned that he believed the Russian President Vladimir Putin might have talked himself into a corner.

“My guess is he will move in. He has to do something,” Biden said, referring to Putin.

“Russia will be held accountable if it invades. And it depends on what it does. It’s one thing if it’s a minor incursion and then we end up having a fight about what to do and not do,” Biden said in the press conference Wednesday.

The White House moved swiftly to clarify those comments which triggered alarm in Washington and Kyiv.

“If any Russian military forces move across the Ukrainian border, that’s a renewed invasion, and it will be met with a swift, severe, and united response from the United States and our allies,” said Press Secretary Jen Psaki.

Biden also said Europe’s reliance on Russian energy exports could be turned against Moscow in the event of military escalation.

“Everybody talks about how Russia has control over the energy supply that Europe absorbs. Well, guess what? That money that they earn from that makes about 45% of the economy. I don’t see that as a one-way street. They go ahead and cut it off — it’s like my mother used to say: “You bite your nose off to spite your face.”